(This blog is also available on Medium and on KDnuggets)

Kubeflow just announced its first major 1.0 release recently, which makes it easy for machine learning engineers and data scientists to leverage cloud assets (public or on-premise) for machine learning workloads. In this post, we'd like to introduce MPI Operator, one of the core components of Kubeflow which makes it easy to run synchronized, allreduce-style distributed training on Kubernetes.

There are two major distributed training strategies nowadays: one based on parameter servers and the other based on collective communication primitives such as allreduce. 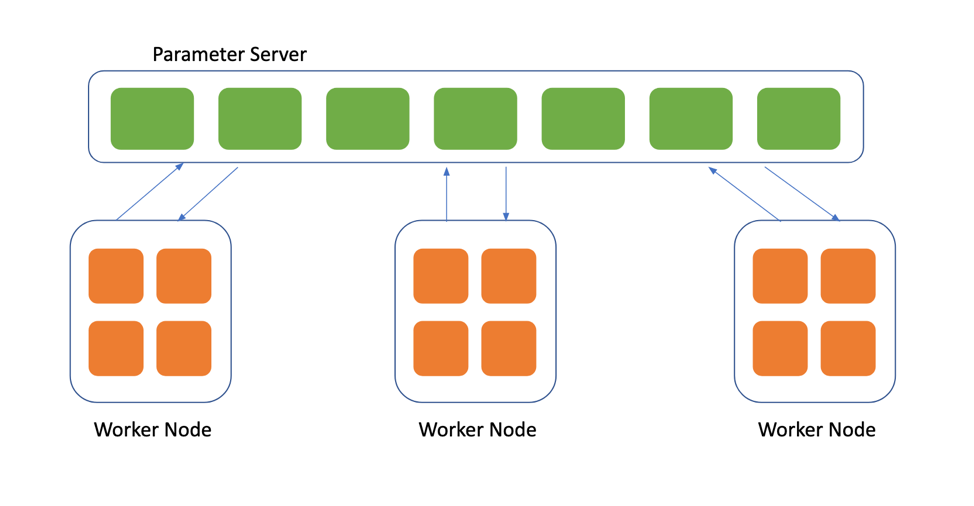 challenges involved in order to optimize the performance:

There are many existing technologies available that provide implementations for these collective communication primitives such as NCCL, Gloo, and many different implementations of MPI.

Unlike other operators in Kubeflow such as TF Operator and PyTorch Operator that only supports for one machine learning framework, MPI operator is decoupled from underlying framework so it can work well with many frameworks such as Horovod, TensorFlow, PyTorch, Apache MXNet, and various collective communication implementations such as OpenMPI.

We've been working closely with the community and industry adopters to improve the API spec for MPI Operator so it's suitable for many different use cases. Below is an example:

Note that MPI Operator provides a flexible but user-friendly API that's consistent across other Kubeflow operators.

Users can easily customize their launcher and worker pod specs by modifying the relevant sections in the template. For example, customizing to use various types of computational resources such as CPUs, GPUs, memory, etc.

In addition, below is an example spec that performs distributed TensorFlow training job using ImageNet data in TFRecords format stored in a Kubernetes volume:

MPI Operator contains a custom controller that listens for changes in MPIJob resources. When a new MPIJob is created, the controller goes through the following logical steps: 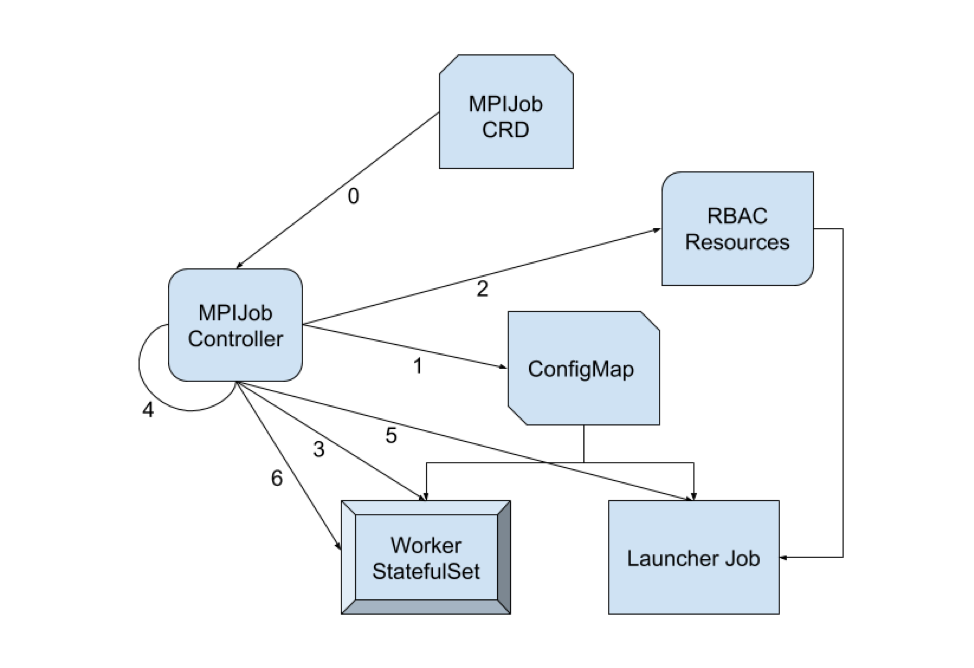 For more details, please check out the design doc for MPI Operator.

At the time of writing, there are 13 disclosed industry adopters and many others who've been working closely with the community to reach where we are today. We'd like to showcase some of the use cases of MPI Operator in several companies. If your company would like to be included in the list of adopters, please send us a pull request on GitHub!

At Ant Group, we manage Kubernetes clusters with tens of thousands of nodes and have deployed the MPI Operator along with other Kubeflow operators. The MPI Operator leverages the network structure and collective communication algorithms so that users don't have to worry about the right ratio between the number of workers and parameter servers to obtain the best performance. Users can focus on building out their model architectures without spending time on tuning the downstream infrastructure for distributed training.

The models produced have been widely deployed in production and battle-tested in many different real life scenarios. One notable use case is Saofu – a mobile app for users to scan any "福" (Chinese character that represents fortune) through augmented reality to enter a lucky draw where each user would receive a virtual red envelope with a portion of a significant amount of money.

Bloomberg, the global business and financial information and news leader, possesses an enormous amount of data – from historical news to real-time market data and everything in between. Bloomberg's Data Science Platform was built to allow the company's internal machine learning engineers and data scientists to more easily leverage data and algorithmic models in their daily work, including when training jobs and automatic machine learning models used in the state-of-the-art solutions they're building.

Iguazio provides a cloud-native data science platform with emphasis on automation, performance, scalability, and use of open-source tools.

According to Yaron Haviv, the Founder and CTO of Iguazio, "We evaluated various mechanisms which will allow us to scale deep learning frameworks with minimal developer effort and found that using the combination of Horovod with the MPI Operator over Kubernetes is the best tool for the job since it enable horizontal scalability, supports multiple frameworks such as TensorFlow and PyTorch and doesn't require too much extra coding or the complex use of parameter servers."

Iguazio have integrated the MPI Operator into its managed service offering and its fast data layer for maximum scalability, and work to simplify the usage through open source projects like MLRun (for ML automation and tracking). Check out this blog post with an example application that demonstrates Iguazio's usage of the MPI Operator.

Polyaxon is a platform for reproducible and scalable machine learning on Kubernetes, it allows users to iterate faster on their research and model creation. Polyaxon provides a simple abstraction for data scientists and machine learning engineers to streamline their experimentation workflow, and provides a very cohesive abstraction for training and tracking models using popular frameworks such as Scikit-learn, TensorFlow, PyTorch, Apache MXNet, Caffe, etc.

"Several Polyaxon users and customers were requesting an easy way to perform an allreduce-style distributed training, the MPI Operator was the perfect solution to provide such abstraction. Polyaxon is deployed at several companies and research institutions, and the public docker hub has over 9 million downloads.", says Mourad Mourafiq, the Co-founder of Polyxagon.

Community and Call for Contributions

We are grateful for over 28 individual contributors from over 11 organizations, namely Alibaba Cloud, Amazon Web Services, Ant Group, Bloomberg, Caicloud, Google Cloud, Huawei, Iguazio, NVIDIA, Polyaxon, and Tencent, that have contributed directly to MPI Operator's codebase and many others who've filed issues or helped resolve them, asked and answered questions, and were part of inspiring discussions. We've put together a roadmap that provides a high-level overview of where the MPI Operator will grow in future releases and we welcome any contributions from the community!

We could not have achieved our milestones without an incredibly active community. Check out our community page to learn more about how to join the Kubeflow community!